Krusty the Clown once said that honeydew is the "money melon." Herschel Shmoikel Pinchas Yerucham Krustofski and I might have a few things in common, but our views on sweet round fleshy fruit cannot be more different.

For me, cantaloupe is where it's at; "it" meaning "melony goodness" and "at" meaning "juices running down my chin."

The problem with cantaloupe — or any melon, for that matter — is getting through its protective shell, eliminating the pits that trip you up and spoil things, and reaching the good part. I could use that last sentence as a profound way of explaining how that also applies to the mystery of interaction and what makes human relationships truly human, but quite frankly whenever someone says "melons" I can only think of boobs.

I found a gadget that helps tackle the melon-carving problem. If you're looking for a gadget to help you get more boobs, you'll have to seek advice elsewhere.

As you know, I'm a sucker for gadgets, gizmos, and geegaws. I'm also a fan of melons (both the fruit and the boobs and I promise that will be my final boobs reference). Mrs. The Anthony Show often buys a whole melon every week — presliced-at-the-store melon doesn't taste as fresh — and it's my job to cut it.

I accept this responsibility, mainly because it's one of those things, like doing laundry, that I know the wife is capable of performing but for whatever reason I'm never completely satisfied with her performance and I try not to say anything but she knows that I'm dissatisfied because I don't hide my emotions very well and it causes an awkward moment over something stupid really and I don't want to go to marriage counseling and may a hundred bucks an hour for some guy to try to figure out what bigger picture is being drawn by my inability to appreciate my wife's melon-cutting performance.

And I have to really be the mood to get to melon-work, because melon-work, even when I don't have a million other things to do, can be a drag. And if I don't cut up the melon right away, it just sits there on the counter, drilling a melon-psychic hole into my brain, like that Edgar Allen Poe story, "The Tell-Tale Honeydew."

I'd seen a melon-cutting gadget in Bed Bath & Beyond, but I don't usually buy tools that are so focused on a particular kind of food, like a lemon zester. However, this week Mrs. The Anthony Show bought a cantaloupe and a watermelon, and since we go through a couple of melons a month, a convenient tool might be a worthy investment.


A BRIEF BED BATH & BEYOND DIGRESSION
So I broke down and shelled out the 20 or so bucks for the ProFreshionals slicer. You don't have to be one of those "extreme couponing" nutjobs to know that you should never buy anything at Bed Bath & Beyond without wielding one of those 20%-off coupons that arrive in your mailbox every week and even though there's an expiration date the BBB people run them through no matter how old they are.

I had both the 20%-off coupon and a less-common coupon worth $5 off a purchase exceeding 15 bucks. I did the math incorrectly in my head and used the 20%-off coupon, which returned just four ducats instead of the five I would have been discounted with the other coupon. Such is my life that I stewed about it on the way back to my car but wasn't so desperate that I was gonna go to customer service to switch it up.

LET'S CUT SOME FRIGGING MELONS!
I returned home and asked my soon-to-be-5-year-old daughter whether she'd like to watch the greatness that is cutting a melon. She said something that translated to "I'm going to play my Leapster, which is far more interesting than anything you're doing." 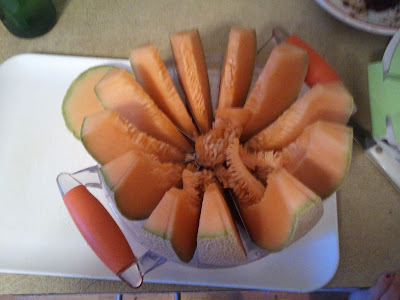 I followed the instructions and bam! Cantaloupe! You can see that the slicer removed almost all the seeds. Put the fine touches on the melon is pretty easy, and I didn't have to really handle any of the guts. Let's see what I did for the watermelon. Slice a small piece off. That's where you're going to begin the slicing. You may want to lop off a piece on the other side so the melon doesn't roll around. 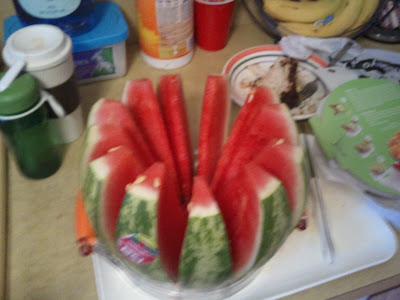 With a little bit of effort, you push the slicer through. You might have to use a knife at the end if you have trouble getting the slicer through the bottom of the melon, but again, it's still less effort than the old way. There's an extra bonus with a watermelon: because it's not hollow in the middle... You get this alluring phallic melon cylinder. I offered it to Mrs. The Anthony Show, who enjoyed it very much, for some reason. 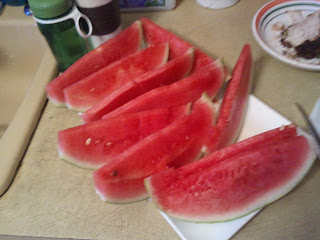 Here's what the slices look like. The tool will be very handy during a barbecue. If you spent most of the afternoon grilling and lugging condiments back-and-forth from the house to the patio, you won't be in the mood to carve up a watermelon.

Just for the hell of it, I decided to go an extra step, and apply one of my other recent gadgets, the Zoku ice pop maker. 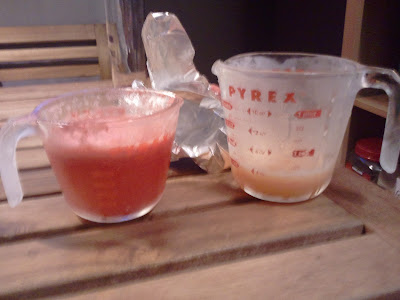 After juicing the melons with my blender... I made a batch of better-looking-than-tasting cantaloupe-watermelon ice pops. The kids liked them, which was a bit surprising because they weren't as sweet as what you'll find in your average supermarket freezer.

All-in-all, a pretty successful evening. Too bad I had to ruin it a few hours later with my awful bacon-hot dog combo!
Posted by Anthony at 8:49 PM

Anthony
Hi! How are you? Hey, that's great!